Yesterday, September 26, 2019, Joseph Maguire, the acting Director of National Intelligence, testified before the House of Representatives Intelligence Committee regarding a whistleblower’s complaint that he withheld from Congress beyond the prescribed timeline for submitting such documents. He opened his testimony with some remarks about his long service in the military and in the government, emphasizing that everything he has done (and, by extension, continues to do) is “legal, moral, and ethical” and upholds the Constitution. 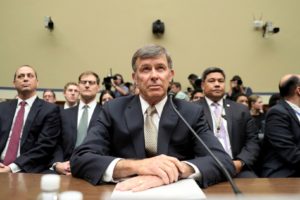 I am unqualified to address the legality of his actions, and I leave that determination to those whose study of the law has been their life’s work.

Rather, I want to look at what we mean by “moral” and “ethical.” Are morals and ethics different or the same? How important are they to individuals? To the nation? Should they be separated from or incorporated into politics? And how do they relate to our Constitution, to which our public officials swear allegiance?

In general, morals are defined as an individual’s principles regarding right and wrong whereas ethics refer to codes or principles provided by an external source. If we look at this closely, we see that moral and ethical behavior are not the same and, in fact, may be in conflict. In general, morals refer to a guiding principle to be good. Ethics, on the other hand, tend to define what is allowable or correct behavior. In fact, any simple googling of “ethics and morals” shows a lack of conformity about these terms; some sites even reverse the definitions, asserting that ethics are internal and individual while morals are external and social. For the sake of clarity, let’s say here that ethics are the external and morals are the internal mechanisms of judging behavior and belief.

Mr. Maguire’s testimony demonstrated that he – like so many in today’s body politic – is more concerned about legal matters and beg off the moral or ethical discussions with the excuse that those matters are not their responsibility or privilege. By the very fact that one is human and exists in society, morality and ethics are not only involved but of key significance. When we look in the mirror, or when we pray to our God, our morals and ethics are on display. But most importantly, what is paramount for us: that which is right or that which is good? For Mr. Maguire, it was evident – by omission – that he was troubled by the difference and wished not to decide. His constant refrain was, “It is not my responsibility or privilege. . . .”

The gray area is difficult to maneuver, perhaps impossible. Can or should a person violate the ethical principles of a system (in this case, the government) in order to maintain moral integrity, or should a moral person subjugate his/her moral principles to follow a systematic code of ethics for the good of that system (situational ethics)?