I am consumed by impeachment news, glued to CNN, fascinated by each day’s revelations about Trump, his cohorts, supporters, and enemies, and the public reaction.  Each upward tick of “for impeachment and removal” gets my applause and approval.  I am living through a historic time, waiting for the denouement, knowing that – whatever the outcome – this will be a moment in American politics that reverberates for years to come.

There are, however, two incidents that particularly stand out for me this week.  One is a comment from a reporter, Mark McKinnon, which I think is a particularly astute observation; the other is a response from Ralph Reed, a Christian Conservative, which is particularly horrific.

As the news reveals this week, Trump decided unilaterally to withdraw American troops from key positions in northern Syria, thereby endangering the safety of the ethnic group, the Kurds, while simultaneously and tacitly approving Turkey’s invasion of Syria’s northern border.  The decision drew the criticism (and even condemnation) of various members of Congress, including a number of Republicans previously seen to be staunch supporters of Trump (notably Senator Lindsey Graham).

Yet, Mark McKinnon noted that their criticism is, at best, contrived: a convenient pretense for them to seem to oppose Trump while, in fact, they stiffen their backbone support of him in the impeachment proceedings.  It is their way of deflecting criticism.  Meanwhile, we say and do nothing about Turkey’s invasion, about the abandonment of the Kurds, about the dark future that seems inevitable for Syria.  Our isolationism raises its ugly head yet again (see also: Eastern Europe, Vietnam, Tibet, etc.).

Perhaps less timely (in terms of current events) but more disturbing is a response provided by Ralph Reed in a recent interview.  Reed, to remind everyone, was the first director of the ultra-conservative Christian Coalition of the 1990s and is the founder of the Faith and Freedom Coalition (started in 2009) to oppose political liberalism.  He is a life-long Republican and arguably partially responsible for the Republican Party to become ultra-conservative, even reactionary, in nature. 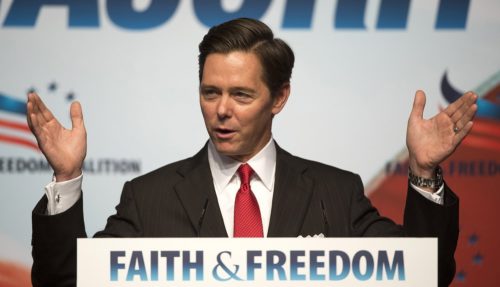 Recently, Ralph Reed was asked, “Does it bother you that Trump lies all the time?”  He answered without hesitation, embarrassment, or irony: “He hasn’t lied to me.”  He didn’t rationalize that answer, only expanded on it, saying that Trump had promised to appoint conservative judges and fulfilled that promised in Gorsuch, Cavanaugh, and numerous federal judgeship positions.  That answer implied that Trump never promised to be truthful (morally, spiritually, politically, or otherwise), so any lies he told actually didn’t count.  Ralph Reed, welcome to the company of the Pharisees, you sanctimonious hypocrite.

So, this week:  shame on you, Ralph Reed; and, thank you, Mark McKinnon.