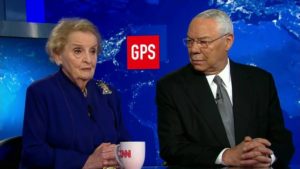 At a symposium with Madeleine Albright, emceed by Fareed Zacharia, Colin Powell said, “We all have got to remember how the Constitution starts: ‘We the people,’ not ‘Me the President.’”

I hope that Congress and all the people they represent are listening. Don’t just hear the words; listen.

And here, reprinted, is an opinion piece by the Hon. U.S. Rep. Lloyd Doggett of Texas:

Impeachment of a president is a question of enormous magnitude, not to be undertaken lightly. Under our Constitution, it is an essential tool to check abuse of presidential authority and ensure one-person rule does not replace our system of checks and balances. Our founders did not intend for anyone to be above the law — certainly not the executive wielding the greatest power.

In late May, I called for an inquiry to determine whether President Trump had committed impeachable offenses in his reaction to the Mueller report. He insisted that, while president, he could neither be investigated nor prosecuted, that he is empowered to ignore Congress and declared the Constitution allows him to do “whatever” he wants. Beyond shattering norms, Trump seems intent on breaking the law many days; on others, he tries to break us with hate speech.

This inquiry has reached a more ominous level. Trump attempted to shake down the president of Ukraine — a country under dire Russian threat and partial occupation. He did so in a call shortly after inexplicably suspending about $400 million in military assistance.

In response to the Ukrainian president’s interest in acquiring additional U.S. weapons, Trump replied: “I would like you to do us a favor, though.” He wielded the full force of the presidency not to protect America, solely to advance himself. Compromising the integrity of our elections and our national security for personal gain represents betrayal of his oath of office.

America learned about his recent wrongdoing only because of a courageous whistleblower, who raises more alarming concerns of coverup with the administration’s “lock down” of the call memo. The complaint noted that it was “not the first time” a transcript had been moved.

Though a Trump-appointed Inspector General described the whistleblower’s report as “urgent,” “credible” and “most important,” the administration delayed access in defiance of the law. Now, over 300 former national security professionals, Democratic and Republican, have challenged Trump for “unconscionable abuse of power.”

Beyond the cover-up, the president is making threats, calling a source a “spy,” invoking execution. Trump has called for “arrest for treason” of the House Intelligence Committee chair and even raised the specter of “civil war” and a “coup.”

Among the cascade of incriminating information are additional reports on the 2017 invitation of Russians into the Oval Office. Trump not only welcomed election assistance from Russia but also invited more interference.

Our reaction to this lawless president sets the precedent for any president, of either party, who threatens our democracy. We act because of danger from one who has lied so much that, perhaps, he cannot distinguish right from wrong.

Responding to this unfit president with words alone is insufficient. Putting partisanship aside, only impeachment will preserve the rule of law. Trump should be impeached for crimes he has confessed: using your tax money for himself. When caught extorting a foreign country to interfere in our election, he first tried to cover it up, bragged about it, and did it again. The most incriminating evidence may come from the most compelling witness: President Trump himself, openly requesting foreign governments to interfere in our election for his personal benefit.

It is time to impeach: for abuse of power jeopardizing our security in favor of personal gain, and for obstructing justice through cover-ups, witness intimidation and refusal to disclose evidence regarding the extent of his harm to our security.

Congress must do more than consider the next election. Averting our eyes would abdicate our responsibility. There is no cause for celebration here. Only the solemn responsibility to safeguard our national security and our constitutional system of government.

It is time to enforce our founders’ boundaries on a president who respects none.

This site uses Akismet to reduce spam. Learn how your comment data is processed.